The Group is a number of interested persons, who are concerned about excessive car park fees in Ryedale District. There is no membership, no subscription, no constitution, no deed of trust and no separate legal persona. Anyone may attend discussions.

We have the following brief comments on the Report to the CS&L meeting of 31st January 2008:

In the light of our comments, we feel this whole issue should be referred to the Council’s Scrutiny Committee.

a & b Disputed – see below and attached charts.

c. This is disputed. The only free public car parks in Malton that we are aware of are the free on-street spaces in Market Square and Wheelgate (unless one counts the car park at Morrisons for Morrisons customers only and/or the staff and visitors’ car park at  Ryedale House.

d. A 20.5% return is extremely good, bearing in mind the importance that the Council attaches to about 200 questionaires returned in regard to the redesign of Malton (the total population being about 4,000. The low rate of return of the questionnaires does NOT             indicate that few businesses have a strong opinion of the trial: what it does indicate is a general distrust of filling in forms about their businesses, which might fall into the wrong hands.

e. 80% of people who did respond indicated they felt the trial was effective. The “Feel Good” factor is important. It  is difficult for any business to ascertain the reason for an improvement of trade, which could be attributed to more than one reason. However 23% were satisfied that there had been an increase of footfall into their premises. That is an appreciable and significant percentage – we never expected the pilot to solve all Malton’s problems in a single 12 month period.

This is disputed. See Appendix

Results of Consultation – See above.

PLEASE NOTE the Pilot does NOT implement the recommendations we made two years ago. Our recommendation was a single charge of £1-50 all day on Wentworth Street, and charges of 50P per hour on the short stay car parks (plus a punitive rates to apply in excess of 2 hours stay on a Short Stay car park). IF THIS HAD BEEN IMPLEMENTED, PEOPLE WANTING TO PARK SHORT STAY WOULD NOT HAVE BEEN TEMPTED TO PARK ON WENTWORTH STREET CAR PARK.

Incidentally, it is good practice to take cars from the Market Square car park into Wentworth Street, as this ensures that more spaces will always be available for short-stay visitors and shoppers.

A revised Appendix B (attached) has been obtained, and the data on this has been transferred onto the attached charts. These show:

The passage quoted by officers in support of the Council’s position is as follows:

“Many people fear that making changes to the way that parking is managed will adversely affect the town’s economy………. However, the limited evidence which does  exist  suggests that it is the town’s broader retail, commercial, leisure or tourism offer which is the primary factor affecting the town’s competitiveness, not the provision of parking…………..” (Page 6 Column 1)

A. “When changes to parking restrictions, charges or enforcement are made, the evidence suggests that the primary responses to that change tend to be:

B “However, it is essential that gateway parking is complemented by good signposting to the car park on approach roads, as well as pedestrian signposting from the car park to the town centre itself” (Page 6 Col 2)

This was never done in the case of Wentworth Street.

Higher parking costs do tend to lead to shorter stays which can affect retail revenue per head……………..”(Page 9 Col 1)

D.“In general terms comparison shopping is thought to be more susceptible to parking controls than convenience shopping and in some case there does appear to be a short-term downturn as a result of introducing charging”(Page 9 Col 2)

Please note that this comment is completely consistent with and confirms Lockwood,  who defines status of town  in terms of whether or not they are a national centre, a regional centre (eg Leeds), a sub-regional centre (eg. York or Scarborough) or a District centre (eg. Malton/Norton or Pickering, and recommends levels o charges which are appropriate to each type of centre.

F. “The following is a list of signs that greater management  of parking may not  bring benefits:

The last three bulleted items would clearly include Malton

There are other passages which could be quoted in support of the Action Group’s case. 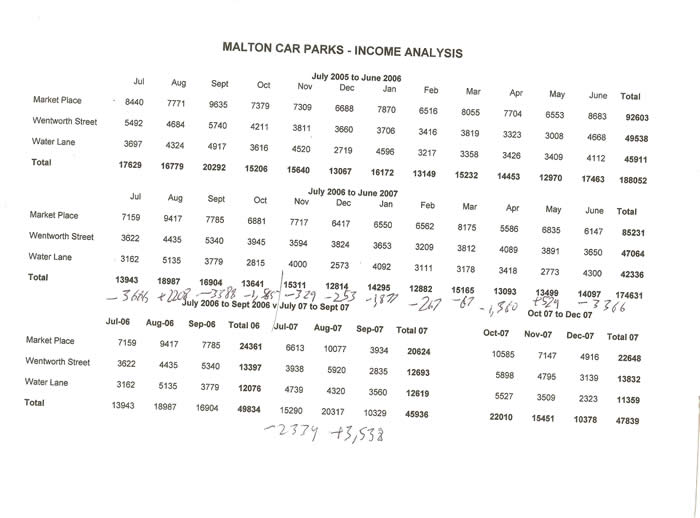 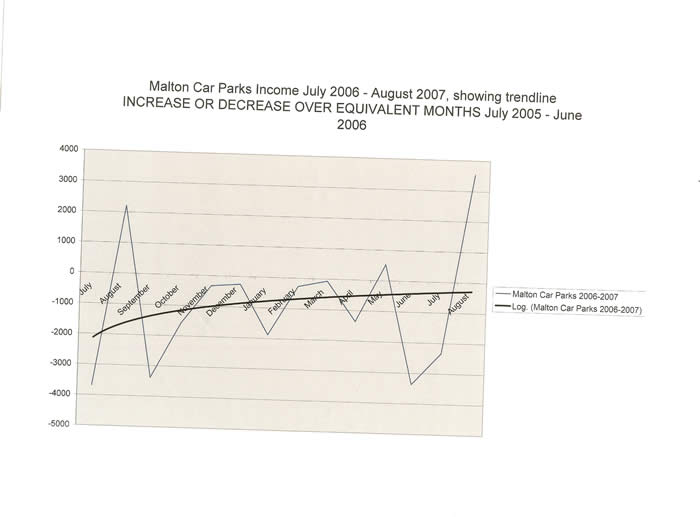